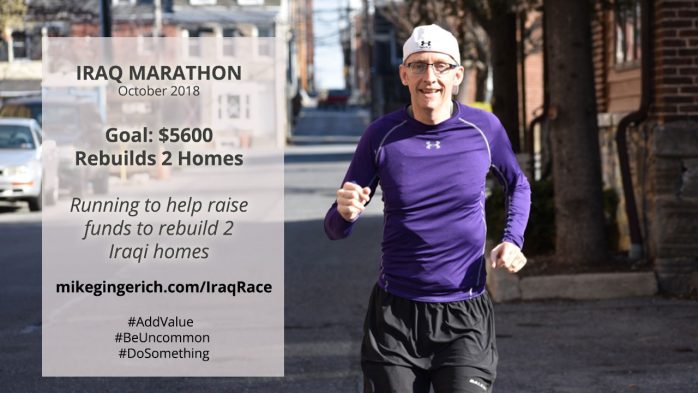 The run for Iraq vision was a big one!  To raise $5600 through running a marathon in Iraq to help rebuild homes in northern Iraq that had been leveled by ISIS and the fight to liberate the area from ISIS control in and around Mosul.

The aim was for Mike Gingerich to run the Erbil International Marathon as way to raise funds and bring awareness to the situation of many families whose lives had been decimated when they have to flee their homes as ISIS moved in and then whose homes had been destroyed during the occupation.  With no insurance and resources to rebuild, these were wonderful families in great need and no means to start over.

Mike’s goal was set:  Run the marathon in the northern Kurdish capital city of Erbil, Iraq to raise funds, and meet with the families in need.

The Run for Iraq Vision:

I was in Iraq for the first time in 2016 and served families then that had been displaced and were homeless from fleeing ISIS. This was a return trip to visit them, encourage them, and run the marathon for them! The Erbil International marathon (26.2 miles / 42 KM) is an international event to promote goodwill and peace in the region among people of different cultures, tribes, religions, and nationalities.

I like to combine my athletic pursuits in running and triathlons with causes that can make a difference. I believe in this so much I started this non-profit to be a channel and conduit for my efforts!

Arriving in Erbil a few days ahead of the marathon I was met by my friend Zana who was my host, guide, and all around great guy to make my trip a success!  After some wonderful Kurdish food we were off to the Marathon Expo the day before the event.  Zana, through past connections, was able to introduce me to the race director!

The marathon race day weather was projected to start in the low’s 70’s and climb into the 80’s with a peak near 90 by mid-day.  With the race starting at 8 am and my projected finish over 4 hours I was looking at seeing the heat climb!

The race started off with a “yellow sky” due to a dust storm over night that was lingering in the air.  It was like seeing real life with Instagram filter on it!  All was smooth though in hindsight I went out to fast with a 1:59:14 half marathon.  I enjoyed the sites, fellow runners, fans, and sounds (Muslim call to prayer from a local Mosque) of Erbil as we “circled the city”.  The race was run on one of the ring roads, a interstate multi-lane highway around the city center.  We would do the loop just over 4x.

I was good until the 20 mile marker in this run for Iraq.  By that point we were so spread out that I was running miles along (not what I hoped!), the heat was cranking up, and my legs were cramping big time.  I had to stop at a hydration station and drink long and hard.  It was a battle getting the cramping legs moving again and the last 10 KM was like that over and over until I made it past 25 miles and then just did a gut-check and raced on to the finish.

What a joy to hit the finish line and accomplish the task.  Overall, over $4800 was raised and a number of families were encouraged by my visit as I was able to sit with them, hear their story, and tell them what I was doing.  It was a grand adventure, and worth every blister and challenge!

As you might expect, the need is not over.  There are many homes needing rebuilt and it is a privilege to continue to get funds to the non-profit on the ground in and around Mosul, Iraq to help continue to rebuild homes for wonderful families.

My hope and prayer is that you can be inspired to help someone in great need today!